What are the Factors that Affect Anode Life?

In electrowinning, metals ions dissolved in an electrolyte are deposited in a reduced metallic form at the cathode. The conversion of the metal from an ionic (dissolved, positive charge) to metallic form (solid, no charge) at the cathode requires a supply of electrons into the electrolyte solution which is supplied from the anode.

In essence, an anode is a mechanical part that is subject to wear and tear and has a finite operational lifetime. One manner in which to appreciate anode wear is to consider anodes similarly to car tires. Tires are designed to perform over a service life of tens of thousands of kilometers, ultimately however, individual driving habits determine how long a tire performs before replacement is required, and while tires are engineered for the realities of the real world environment, no tire manufacturer can prevent a mechanical failure due to a puncture. Similarly, anodes are engineered to provide a predictable service life in a specific electrolyte composition but like the car tire analogy, certain impurities in the electrolyte can contribute to accelerated wear and failure.

Electrowinning systems from emew corporation use a proprietary anode design classified as being a dimensionally stable (DS) type. DS-anodes do not undergo a change in size or voltage characteristics in service. As an example - graphite anodes, in comparison, mechanically break down under anodic attack, contaminating the electrolyte and require constant maintenance to preserve their voltage characteristics and efficiency. DS-anodes typically are constructed of a corrosion resistant material such as titanium with a thin coating of mixed metal oxides (MMO) of iridium, ruthenium and tantalum depending on the electrocatalytic properties desired. DS-anodes are designed to preserve their physical dimensions and voltage characteristics and do not physically break down or “dissolve” away - however, as the old saying goes “nothing lasts forever”. DS-anodes eventually wear out and can fail. Almost without exception, premature anode wear and/or failure are attributed to poor electrolyte quality with a few particular bad actors and the primary mode of failure of DS-anodes is MMO coating loss.

DS-anodes undergo “wear” though a number of mechanisms, but primarily, fail when their voltage characteristics change due to the gradual loss of MMO coating. As mentioned previously, wear due to current passing through the anode is normal and taken into account. When designing DS-anodes for a particular application, engineers can determine how much MMO needs to be applied to achieve a lifetime at a specific current density given that the MMO coating is gradually lost over time. Like car tires, anodes wear over time and it is important to note “at a specific current density”. Increasing current density will accelerate the rate of MMO coating loss and thus reduce the life of the anode similarly in how “hard driving” - i.e. excessive speed and braking increase wear and thus reduce the life of a car tire.

Unfortunately, beyond the normal electrochemical wear, loss of the MMO coating can be accelerated in the presence of impurities commonly found in electrolytes. Suspended solids, halogen ions such as fluoride, chloride, and organic materials such as saccharin and glues and can contribute to accelerated anode wear and failure.

In electrowinning systems, suspended solids affect product quality by trapping, carrying and depositing impurities into the cathode. Cathode quality aside, suspended solids can form a physical (and conductive) bridge between the anode and cathode and the resulting short circuit can quickly damage the surface of the anode. Given that electrowinning systems operate at currents similar to welding machines, short circuits due to solids can quickly burn a hole through the titanium shell of the anode. Fortunately, suspended solids are a relatively easy impurity to control through physical filtration. 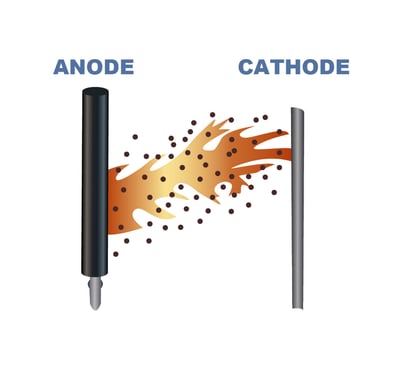 Fluoride, chloride and bromide can affect anode life by oxidizing the titanium metal to a titanium oxide that, in turn, changes the surface morphology of the titanium substrate from metallic crystalline to a porous oxide layer and reducing the adhesion of the MMO coating on the titanium substrate. The rate of halogen attack is a function of both the halogen ion species and concentration. In terms of reactivity, fluoride has the lowest concentration threshold for evidence of anode degradation at concentrations of < 1 mg/L, followed by chloride at < 10 mg/L. 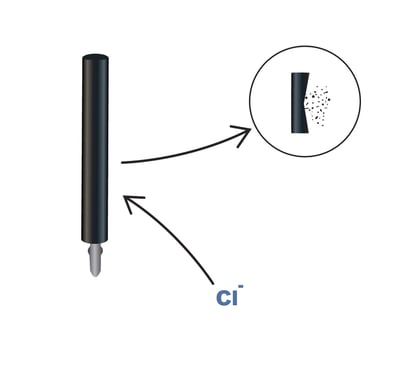 Electrolyte additives materials including organic based additives like saccharin and glues in the electrolyte can lead to DS-anode coating failure when present in excessive amounts. Organic materials may act as complexing agents where they adhere to the coating like a piece of sticky tape and remove the MMO coating as they leave the surface of the anode. Similar to the other impurities mentioned previously, the concentration of organics in the electrolyte should be controlled. 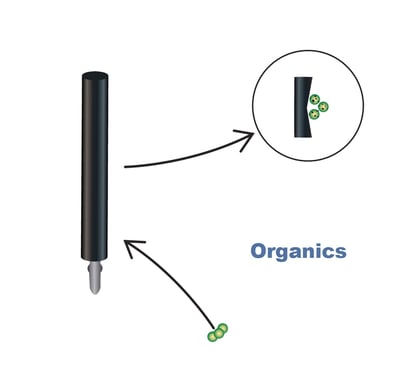 The table below summarizes the common impurities responsible for MMO coating loss and their recommended concentration limits.

Dimensionally stable anodes used in an emew electrowinning system are designed for a long, trouble free service life -  typically on the order of years of service. Moreover, DS-anodes can be refurbished by removing the existing coating and applying a new one and provided the anode is mechanically in good condition, a DS-anode can be recoated multiple times. Nevertheless, there are impurities found in electrolytes that can contribute to premature MMO coating wear. Monitoring and control of these impurities is necessary to ensure the DS-anodes have a long service life.