The electro-refining of copper is a multi-step process that starts with copper concentrate that is smelted to produce impure copper anodes, which are then to produce LME Grade A copper cathode (+99.99%).  A simplified block flow diagram of copper refining is shown below. 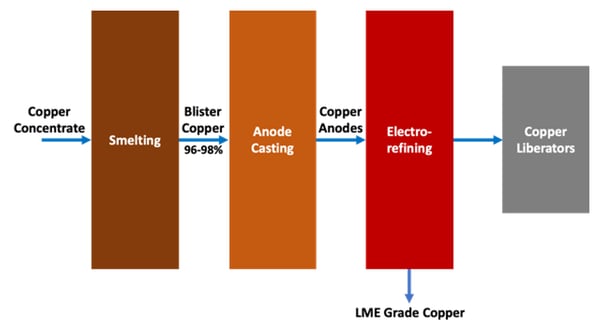 A key aspect of copper electrorefining is the control of copper concentration and impurities in the electrolyte.  The dissolution of copper at the anode is inherently faster than the electroplating of copper at the cathode, hence copper tends to build up in the electrolyte and needs to be controlled.  Without a proper electrolyte “bleed”, the copper would continue to build up along with impurities such as arsenic, antimony bismuth which are present in the impure copper anode and can affect the purity of the final product.  This process of controlling copper and impurities in the refinery electrolyte is known as “liberation” and the electrowinning circuit used for this process is commonly referred to as a “copper liberator”.

Conventional electrowinning technology is commonly used for copper liberator cells to control the copper concentration and impurities , there are many issues associated with conventional liberator technology: 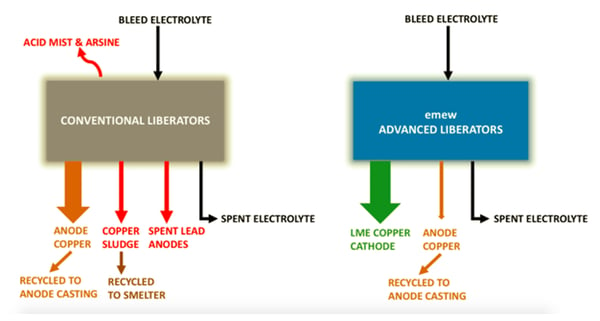 The investment to upgrade an existing from conventional to electrowinning technology must be justified based on cost-benefit analysis.  Let’s take a look at a typical application.

The capital expenditure for an tertiary liberator circuit to treat 80 m3/day of electrolyte depleting copper from 15 g/L to 1-3 g/L is USD 881,200.  The tertiary liberator circuit recovers just over one metric tonne (1145 kg) of copper daily, all of which is currently recycled back to the smelter.  This obviously has an impact on the new copper units that the smelter can process.  That is to say, by treating this ongoing copper recycle from the tertiary liberator cells, the smelter (which has a fixed throughput capacity) is constrained in the of new copper units (as copper concentrate) because it has to keep up with the copper already in process.  Without processing the ongoing production of tertiary copper sludge from the , it will continue to build up.  These recycled copper units contribute to working capital.  Assuming a daily recycle of 1145 kg of copper, 60 days reprocessing time, and LME copper price of USD 6250/tonne, the working capital of this recycle amounts to USD 431,000.  Recovering this copper as cathode with and not recycling to the smelter, the savings in working capital offset the capital expenditure resulting in a net capital investment of just USD 450,200. 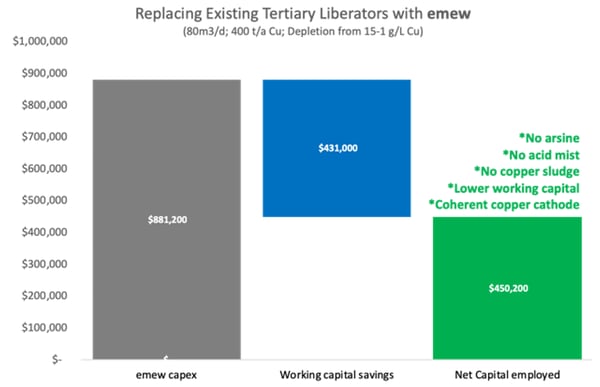 Working capital is just one impact of the recycle of the tertiary copper sludge, copper refineries also charge what are known as Treatment Charges (TC’s) and Refinery Charges (RC’s).  TC/RC’s are intended to reflect the cost to convert a tonne of concentrate into metal, are negotiated annually each year and are deducted from the payable copper price to mines.  TC/RC’s represent a cost to a mine, whereas a revenue for a smelter/refinery.  If a smelter/refinery is not collecting TC/RC’s for processing a given quantity of copper, then they are losing out on this revenue that would have otherwise been collected from fresh copper units as (not to mention precious metals credits from concentrate).  Let’s take a look at the impact of the tertiary copper on TC/RC revenue, as well as low current efficiency and what is known as ‘smelter loss’.

Assuming current TC/RC’s of $90/tonne and $0.09/lb, this works out to USD 115,831 annually in lost revenue from TC/RC’s by recycling the tertiary copper sludge.

Furthermore, the recycle of copper to the smelter inevitably results in some smelter loss which is typically 1.5-2%.  We have assumed 1.5% smelter loss at a cost of USD 37,706.

The effect of these parameters on annual operating cost can be seen in the diagram below.  Overall tertiary liberator cells require roughly 40% the cost to operate compared to conventional liberator cells, not to mention the host of other benefits. 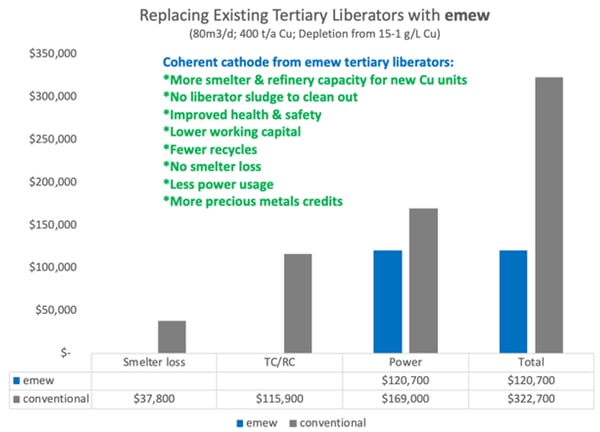 Given the savings in working capital and operating costs, the decision to upgrade tertiary liberator cells to is well founded.  The net capital cost of ($450,200) is paid back by the net operating cost savings ($202,000) in approximately 2 years.  Considering the cost of copper recycle with conventional liberators, results in ongoing savings of TC's, RC's and power requiring roughly 40% the operating cost of conventional tertiary liberator cells.  In addition to the economic arguments in favor of , the improved health and safety benefits make electrowinning cells the clear choice:

This case is even more compelling if the current liberators need to be upgraded or there are tougher Occupational Health requirements.