In conventional electrowinning alternating planar anodes and cathodes are placed into a solution bath and electrolyte is slowly circulating or standing still. Positively charged ions called cations slowly make their way towards the cathode where they are reduced (i.e. gain electrons) and plate out as metal.  The metal cathodes are harvested at the end of each plating cycle to recover the desired metal. Sounds good?  Well, not so much. There are some problems and inefficiencies associated with this convential process. 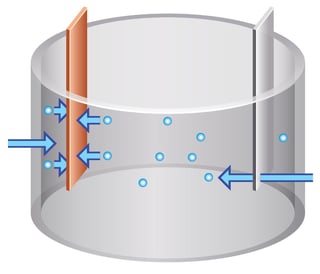 Let's take a look now at a more effective way to overcome these limitations using an advanced electrowinning cell design originally developed by emew over 20 years ago.  The emew cell, a clever acronym for emew Electrowinning, is a cylindrical electrowinning cell in which the electrolyte solution is rapidly circulated past the anode and cathode at a very high flow rate enhancing mass transfer and allowing for improvements in efficiency and recovery. The cylindrical structure of the emew cell allows a greater selectivity and purity across a wide range of metals and even in highly contaminated waste water streams. In stark contract to conventional electrowinning cells, the emew cell is designed such that target metal cations are always presented to the cathode even at low concentrations or in the presence of high concentrations of impurities. The purity that can be achieved with an emew cell is typically 99.99% but can be as high as 99.999% or greater while in conventional electrowinning the purity depends on the initial purity of the solution, the 'delta' of depletion and the relative concentrations of impurites.  For this reason, emew is the clear choice to recover high purity metals from low concentration, complex, mixed-metal streams that are often found in refineries, industrial wastewater and other waste streams. 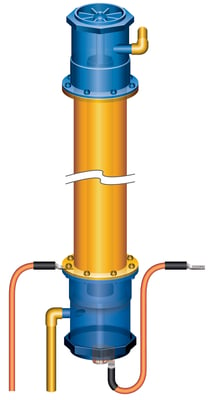 Conventional electrowinning plants are open systems. During the electrowinning process, oxygen bubbles are formed on the anode. The bubbles ultimately burst producing what is known as “acid mist”.  This acid mist is extremely toxic and a known carcinogen that poses a serious health risk to employees and visitors. In addition to this, acid mist is corrosive causes ongoing damage to factory parts and results in a lot of money spent on maintenance.  The emew electrowinning system on the other hand is an entirely closed system, where every emew cell is capped and isolated from the environment.  This eliminates acid mist and creates a safe environment for employees and visitors alike.

On top of this  emew offers real-time, remote performance monitoring of all emew plants to ensure that they operate at above design and ensure the highest safety and environmental standards are met.  All emew plants are monitored 24 hours a day and notifies an operator about process adjustments to be made or emergency situations. The system provides real time information and weekly reporting mechanisms to help operators and management run an efficient, cost-effective operation.