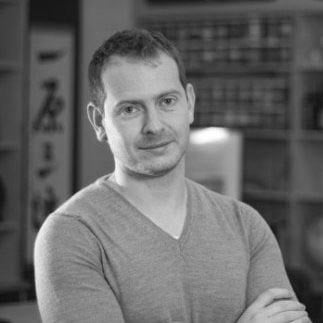 Electrowinning is a process used to recover metals from a solution or an electrolyte, by means of an electrolytic chemical reaction. This occurs when an electric current passes from a cathode that's negatively charged to a positively charged anode through a metal-containing solution. During this process, the electrons reduce the metal ions in the solution to form a solid metal deposition on the cathode. The quality of the metal produced can vary depending on the individual process and may require further processing or refining.

Metals that are recovered using electrowinning have typically been leached from the ore during an earlier processing stage, and examples include lead, copper, gold, silver, zinc, cobalt, and rare earth metals.

In the case of copper electrowinning, the copper ion in solution (Cu2+) at the cathode will react with two electrons (e-) to produce solid copper (Cu) as per the simplified equation below:

While copper is being reduced at the cathode, a simultaneous reaction will occur at the anode to oxidize water (H2O) to produce two hydrogen ions (H+), oxygen gas (O2), and two electrons, as shown in the simplified equation below: 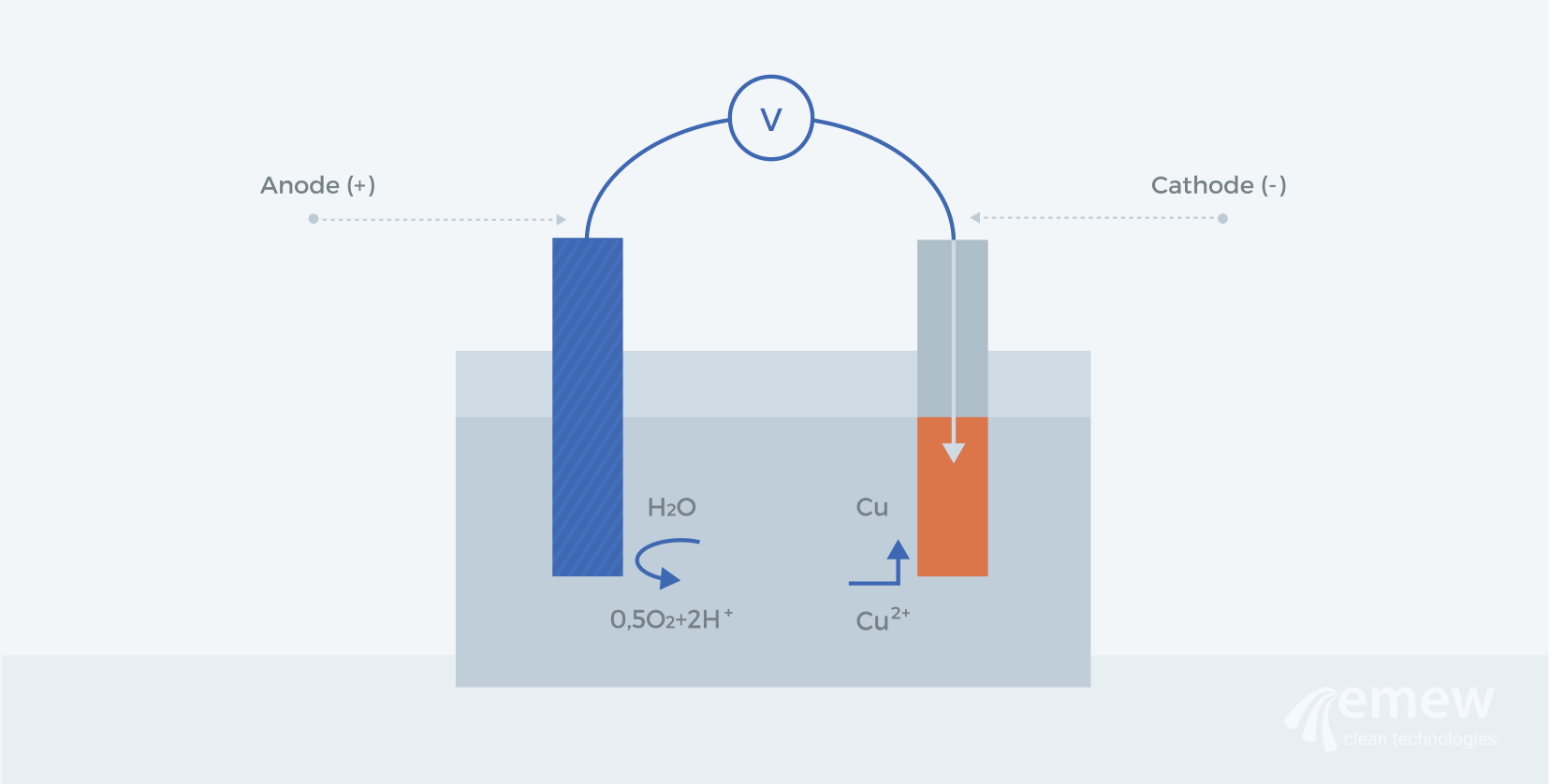 How impurities affect the electrowinning process

1)    By coating the cathode or the anode (typically caused by organic impurities);

2)    By damaging the electrolytic cell (typically caused by excessive chlorine, bromine, or fluoride); or

Other effects include altering the size, shape, or form of the deposition.

How to identify impurities in the electrolytic solution

While an ideal electrolyte would be a pure acid/metal salt-containing no other elements, this is not practically achievable, so impurities are always present.

Direct chemical analysis of the electrolyte is the best and most common way of determining which impurities are present. In an operational environment, this is usually completed using an online tool to allow for real-time analysis of the solution and to provide input into the daily operational decisions. Samples of the solution will be routinely taken and analyzed in a laboratory to ensure the accuracy of any automated analyzer and to provide calibration points.

It is also possible to identify impurities through observation of the electrowinning process. These indirect methods include:

-      Pitting or holes in the metal deposition

-      Beading or ridging of the metal deposition

Are impurities always harmful in electrowinning?

In electrowinning cells that contain manganese as an impurity, it is also sometimes beneficial to have another impurity, iron, present to help counter the impact of the manganese. Iron can help stop the formation of permanganate, which can have detrimental effects on downstream processes.

One of the most common metallic elements found in any mineral deposit is iron, and it is, therefore, one of the most common impurities in any leachate or electrolytic solution. The iron can be present as ferric (Fe3+) ions or ferrous (Fe2+) ions depending on the mineralogy of the ore source, and in an electrowinning cell, it is possible to create a ferric-ferrous redox couple as described below.

At the cathode, ferric (Fe3+) ion is reduced to ferrous (Fe2+) ion by gaining an electron as described by the following equation:

At the anode, ferrous (Fe2+) ion is oxidized to ferric (Fe3+) ion by losing an electron as described by the following equation:

With these two half-reactions occurring simultaneously during the electrowinning process, there are no net products created. However, an electrical current is consumed that would otherwise have been utilized to generate the target metal.  This reduces the current efficiency, which is a measure of the total metal recovery compared to the theoretical metal recovery and reduces the overall efficiency of the electrowinning process.

How much iron is too much in electrowinning?

Determining how much iron is detrimental to the current efficiency of the electrolytic cell is difficult as it depends on a number of factors. These include:

-      Mine or operational strategy

-      Concentration of metal ions in solution

In general, an electrowinning cell will still operate at high current efficiencies with moderate levels of iron present in the electrolytic solution. As an example, in a typical copper recovery cell, a copper to ferric ratio of greater than ten will ensure the efficient recovery of copper without excessive electricity consumption.

The only way to reliably determine the effect that iron will have on an electrowinning circuit is to perform small-scale test work or to collect operational data.

How do you control the iron in an electrolytic solution?

The best way to control the level of iron in the electrolytic solution is to stop it from entering in the first place. Electrowinning is found at the final stages of the metal recovery process, and as such, there are many preceding stages where any unwanted iron content can be removed. Examples of these include:

Effective mine planning will ensure that areas of high iron content are flagged and only economically viable ore is mined and processed further. Similarly, areas with very little iron can be flagged and combined with other ore types to create a ´blended´ or to provide more consistent feed.

Treating the ore at high temperatures and with varying degrees of oxygen can allow the removal of iron-bearing minerals that could not have been removed in an untreated state.

The effectiveness of the options to control the amount of iron in the solution is dependent on the relative costs of each step and the unique nature of each operation. As an example, some operations have multiple ore bodies to choose from and can perform significant ore blending strategies, while others may have environmental restrictions that do not allow for a roasting stage to be performed. As such, it is not always viable to minimize the amount of iron in the electrolyte.

Can you remove or isolate the iron in an electrolytic solution?

If, after all prior processing stages, there is still a reduced current efficiency due to high iron content, it is possible to treat the solution to remove the iron, with two typical options being ion exchange and iron purification.

Iron exchange involves taking part or all of the electrolyte with the high iron content and passing it through a column containing a specially designed resin. The resin takes the form of thousands of small spheres packed into a column, and as the electrolyte is pumped through the column, the resin absorbs any dissolved iron and thus removes it from the electrolyte. The electrolyte can then be processed efficiently through the electrowinning cell. The resin, which is now ´loaded´ with iron, can be ´stripped´ of that iron with a strong acid, and then it is ready to be used again for another batch of high iron electrolytic solution. 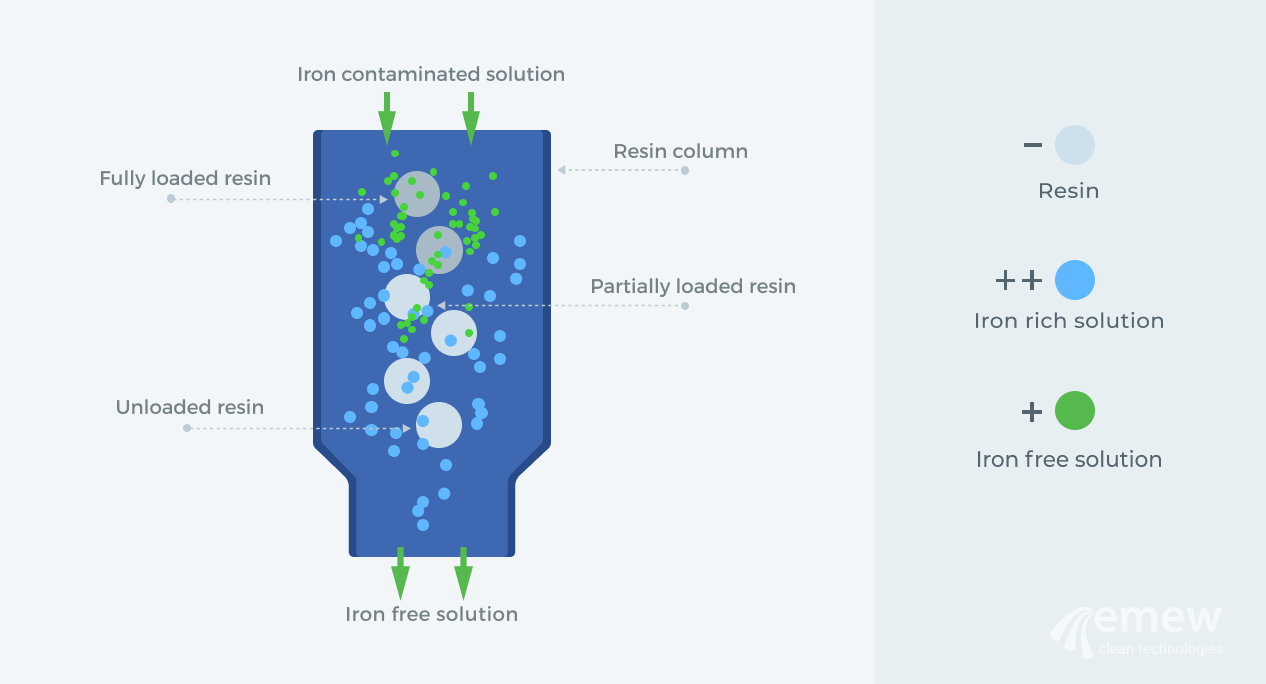 Iron purification involves oxidizing any ferrous iron to ferric iron and then adding a neutralizing agent to precipitate any ferric iron as a hydroxide. This leaves a sludge containing most of the excess iron, which can be separated from the electrolytic solution that can then be processed in the electrowinning cells. Possible precipitation agents are limestone or zinc oxide, and this iron precipitation has the added advantage of precipitating some other undesirable impurities that may be otherwise difficult to remove, such as arsenic or germanium.

The viability of iron removal will depend on the operating strategies and the economics of each individual operation as these steps add significant costs to the initial outlay in capital expenditure and in continued operation expenses.

Minimizing the negative effects from impurities in an electrowinning circuit is imperative to ensure that the cell operates at high current efficiency while producing a good quality product. This is particularly important with regards to the presence of iron, as the formation of a ferric-ferrous redox reaction couple can absorb significant current and power away from the primary objective of the valuable metal.

While controlling the iron content from entering into the solution through effective mining and mineral processing is the best level of control, there are effective methods to remove the iron from the solution to ensure the electrowinning process is efficient.