Electrowinning is the process of ‘winning’ dissolved metals from solution by passing an electrical current through an electrolyte containing said metal.  The fundamentals of the electrowinning process have been discussed in a previous blog.  The relative ease of recovery depends on the electrochemical potential of the target metal relative to Standard Hydrogen Electrode (SHE) which is defined by the following reaction:

The efficiency of electrowinning any metal, including Nickel, depends on a variety of factors including the concentration of metal in the electrolyte, current density, temperature, pH, conductivity, impurities and so on.  If the electrochemical potential is sufficiently positive, these factors become less important.  With however, the slightly negative reduction potential means that it requires careful control of conditions to the acquisition of electrons at the cathode to produce metallic plate.

Furthermore, considering both the anodic and cathodic reactions, the overall electrochemical reaction results in the production of acid (H+):

Unless the pH is carefully controlled, the production of acid at the anode will result in the re-dissolution of nickel which decreases the apparent current efficiency (CE) and needless to say the overall recovery efficiency.  Conventional Nickel electrowinning cells overcome this by separating the anodic and cathodic compartments of the using a complex diaphragm that prevents the acid that is generated at the anode from concurrently re-dissolving Nickel that is plated at the cathode. 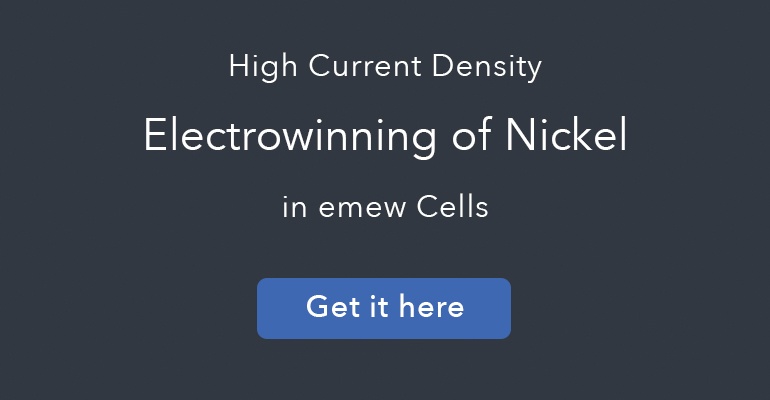 The temperature of the solution should also be carefully controlled to avoid wide fluctuations that will affect the quality of the Nickel plate.  The optimum current density (CD) needs to be applied to ensure efficient production rates without overstressing the deposit causing it to become brittle.  To add insult to injury, if there are impurities present in the electrolyte whose electrochemical potential is similar or more positive than Nickel, they will surely deposit resulting in Nickel cathode that won’t fetch the same premium as coveted LME Grade.  Hence you can see why Nickel is such a moody metal!!

Despite all these complications, operators are keen to recover Nickel due to its relatively high value compared to other base metals, and the ease of sale of high purity cathode to .  With all the recent innovations in technology, surely there must an easier way to Nickel you may ask?

Until quite recently there wasn’t, emewCorporation has developed and commercialized the novel Nickel Process which radically simplifies Nickel electrowinning.  The Nickel process uses the same commercially proven emewPlate cells with a clever combination of process methodology that has revolutionized the way Nickel is electrowon.  You might even call it ‘the Nickel whisperer’ to tame this moody metal. 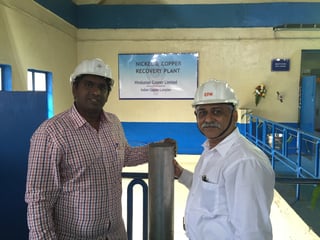